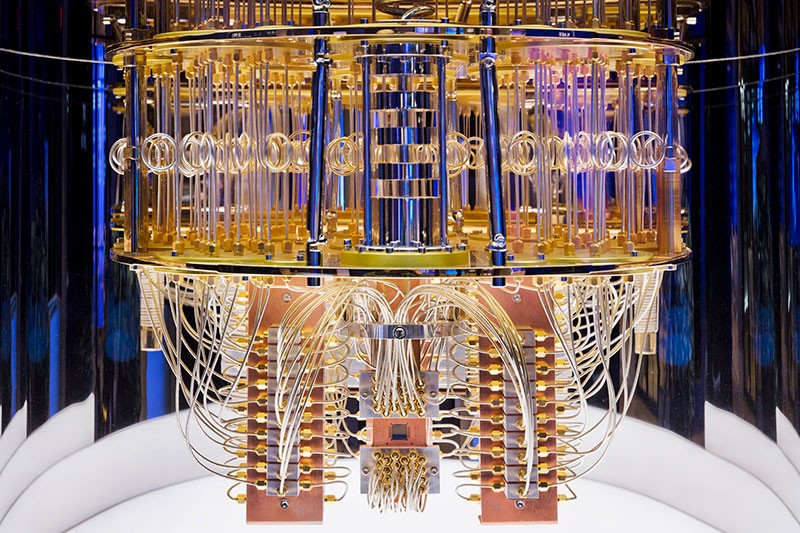 I was reading through the latest developments at NVIDIA, in particular, their deployment of the NVIDIA Grace CPU Superchip in various servers which are optimised for AI/ML data analytics et cetera - These servers obviously offer an obscene level of performance including memory bandwidth up to 1TB/sec and the latest PCIe/Gen 5 protocol allowing 400Gb/s of connectivity. Now, this is great, truly amazing - I love anything and everything NVIDIA do, especially their A100 GPU platform and then I see another article around quantum computing...

I was an early advocate of Quantum computing, in fact, I wrote a paper on the potential dangers of quantum cryptography at University back in 2002, and have read endless works from the likes of David Deutsch, James Binney, David Skinner et al, and like to think of myself as an amateur physicist, well in my mind anyway! I like to play around with Microsoft Q#, it is a good way for developers to get a feel of what may be expected of them in the future, but it isn't for the faint-hearted, it is a sea change of principles and mentality.

Nevertheless, we have seen leaps and bounds in this field over the past 100 years, and I say this field, I mean from the basics of quantum mechanics/physics, electrodynamics and field theory and obviously over the past 20 years to quantum cryptography and computation and more fringe/theoretical applications such as quantum machine learning.

All this aside, I have started to see the one thing I hoped we wouldn't see. I knew it would eventually raise its head but the concept of "hybrid quantum computers". Yes, of course, it makes sense! Why wouldn't you have this? And NVIDIA is investing in this.

Let's get some simple things out the way here, no this is not an emulator, what we are discussing here is a classical computer being augmented with quantum hardware.

Now, I am not going to get into the fine details of probability amplitudes or any of the physics behind quantum computation - It has been written a million times over the Internet and can be easily sourced. I am sure if you are intelligent enough to find this article and read about it, you can find out how quantum computers work and why the world would want them.

What is my point here?

Now, if we didn't have hybrid solutions I would be out of business since some of our best clients take hybrid cloud, colocation and dedicated servers plus various other products! However, does this really help us deal with the actual problem?

Hybrid cars - Good or bad? It was a step in the right direction, it introduced electric cars to the world and helped the world's mindset change but I feel as though the likes of Shell and BP have something to do with keeping the world on gas guzzlers!

You can't just eliminate petrol and diesel cars overnight, it is unrealistic, right? I'm not sure anymore - BP probably think it is, but Greenpeace probably doesn't think so. There has to be a middle ground, so we choose a nominal drop-dead date in the diary and make a commitment as a country but in reality what is actually stopping us? Power availability? Infrastructure? So build nuclear power plants, build charging stations - Problem solved. Oh I missed the part where we don't live in a "United Earth", it isn't the Star Trek era, we still have money and country borders! In 2022 we still have to pay, before you think we are off-topic, it will all become clear towards the end.

The point here is that "should we really be pushing for hybrid quantum computers" or should this be a pure technology. The mindset of the majority of developers is not going to be focused on quantum technologies or how to effectively utilise these technologies. Do we really need quantum computers in "this world" yet? I look at the potential of such technology and I can see applications but none of which this world is ready for, and additionally, our understanding of quantum technologies is relatively poor. Humans don't really understand "how it all works", and yes I know, we "don't understand how planes fly" and we still use them but this technology does feel truly "next generation". It feels like "Star Trek" technology and it excites me, it truly does, but I don't want the world to taint it.

Let me explain what I mean by that. We can talk about nefarious uses of developments in sciences such as nuclear fission and its usage in nuclear weapons or let's look at how the world had a dream of "visiting the stars".  When things started to get interesting, they naturally became expensive and as such unpopular. The space race was over, the Russians had the first man in space and the USA had the first man on the moon. The programmes became underfunded and now we are looking back to the private sector to fund space travel, which, naturally needs to have a "business model". Why we aren't building ships in space from a space dock yet, is beyond me, we were on the right track! We should be there by now! However, the world is too focused on spending money on weapons of war than it is to look to the stars. The fear of ourselves, our fellow humans outweighs any desire to live in the stars.

In the same way, we are on the brink of building something pure, like the first humans to start a fire, explore electricity, or as stated, the first person in space - And in the same breath, we are about to taint it with the "killer application" phrase. The same has happened with Web3.0 and Blockchain technologies - Again tainted by a requirement to have a killer application and make these concepts profit-oriented. Why else would you need a hybrid approach? Let's make the use-cases scientific, let's build it for building's sake. Not everything has to be profit-oriented! Do you remember those days? When the world built things because we could...

But what do we need it for then?

We don't need quantum computers to display adverts on Google or run Netflix or Twitter - We just don't, and this is the reality of the Internet in 2022. People don't use the Internet for what it should be used for but we don't need quantum computers for this. In reality, we don't know why we need quantum computers yet, not really, and that is a wonderful thing, a very beautiful concept which we should treasure. When we started investigating electricity - Some people talk of the Egyptians being the first others the Greeks, regardless, it was over 2500+ years ago! It wasn't until the 1870s that we had an application, a pure, real application which was the light bulb.

Now, am I saying we need to wait another 2000 years? Well maybe we do, maybe we should - Maybe we aren't ready for this technology. There are talks of hybrid models so we can eventually use quantum technology in our cloud environments. Maybe this is like using a Rembrandt as a tabletop or an original copy of Shakespeare's plays to prop up a table leg on an uneven floor.

The only guarantee is that if we release this to the world:

I just sit here and think "come on, the world is better than this, surely". We always claim we will use it to "find a cure for cancer" and in fact, NVIDIAs release does state "Quantum-Powered Drug Discovery".  Yes, I know this all sounds very cynical, but we have hundreds, if not thousands of years of history which back up our ability to find new and more efficient ways to make money or start wars with new technologies.

Maybe this time we shouldn't let governments, militaries and private corporations define how this technology is used, maybe the scientists and communities of researchers; the people collaborating, and the pioneers; maybe they should decide in the same way we have developed the Open Source community.

Oops, but I forgot, they didn't put any money into it. Again, the whole problem of; we are not at the "Star Trek" phase of human development yet - As I said, maybe we do need to wait a few thousand years before we develop this...

I was reading through the latest developments at NVIDIA, in particular, their deployment of the NVIDIA Grace CPU...

What is DeFi? The future of finance?

DeFi - The good the bad and the ugly

Decentralised Finance is designed for the Internet age. DeFi is an open financial...